The End of an Era

When we were children, each one of had a childhood dream of what we wanted to be when we grow up. I too shared a dream of becoming an astronaut. I think it began on May 24, 1994, shortly after my 7th birthday, when I saw the last episode of Star Trek The Next Generation. Whatever the catalyst was, I began to love the idea of space travel. I watched Apollo 13 over and over. I read books about the space shuttle missions. I dreamed that I was part of the Mercury or the Gemini missions as one of the first Americans to leave our home planet.

Now to my point. As times changes and priorities shift, things like NASA and the space program begin to seem pointless. My point isn't to talk about that. My point is to simply show how an organization like NASA has played such a developmental role in my life. My dreams of working for NASA as a CAPCOM officer lead me love to design Lego ships as a child. It lead me to study how integrated circuits work. It has lead me to studying engineering at BYU in the hopes that I can someday add to the projects that will continue mans exploration into the great unknown.

I dont know where the future of space travel lies for this country, but whatever it is, I am sure that I'll continue to follow its development. I'd like to finish by sharing the picture that inspired todays post. This was taken last month on May 14th when the space shuttle Atlantis took off for the last time for a mission to the ISS. The photo was shot from a F15E flying in the airspace near the shuttle. 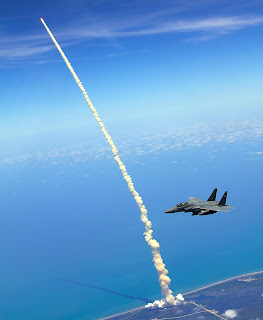