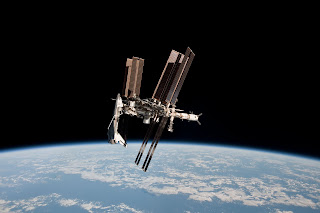 I found this picture on NASA's site the other day from the last mission of the Space Shuttle Endeavor. From what I can find, it is profoundly unique. It was taken as one of the Russian Soyuz spacecraft approached the ISS while the Endeavor was docked. This picture represents the progress of a race toward a greater goal. Differences can be put aside to create and maintain such an amazing accomplishment. With only one space shuttle mission left, this might be the last time an opportunity for a picture like this is even possible. I grew up dreaming of becoming an astronaut, of someday traveling to a distant world, or exploring the infinite domains of the universe. I hope that we as a race are not saying goodbye forever to the prospect of space exploration. Whatever the future of space travel is, I still someday dream of being apart of it, if only has an impassioned observer.