I'm sorry we haven't been very good about keeping up with the blog lately!  I'll start back at right after where we last left off....Kyle's Birthday.

Next was General Conference.
I had asked if my brother and his family (up in Bountiful) were doing anything for conference or if we could drive up after the Saturday morning session and spend the afternoon/evening with them.  They said they were going to be home and they'd love to see us.  During the last talk of the Saturday morning session, we got a call from my brother asking if we could possibly leave ASAP so we could watch the kids while they attended the afternoon session...Not exactly what I had envisioned especially since we were going up to see my brother and sister-in-law as well, but we were basically ready to go so we said sure.  During the Saturday afternoon session, we found out the reason for why we were asked to babysit on such late notice...Jen's mom was called as the Second Counselor in the General RS Presidency (Linda Reeves).  I had started to figure out something big was supposed to happen at the conference, but we had no idea that was going to happen since they weren't allowed to tell ANYBODY (even their two kids on missions had to find out while watching conference). Kyle and I had a fun time watching my 2 nieces and nephew.  They are all super cute.

Then came my 23rd birthday.
My birthday this year was alright.  (It landed on Friday the 13th haha.)  I had a cold all during spring break and it was still here (a week later) on my birthday.  The weather was super cold and rainy all day, but there was some thunder at one point. J  In addition to my cold, Kyle got the flu the night before so he had been up all night and slept most of my birthday (two 3-hour naps).  I started feeling lonely during his second nap, so I hopped into bed with him and read a book.  Later that afternoon, we picked up my car after fixing the AC.  We went to Smith’s to buy candles and flowers, but we ended up going to Costco and picked out even better flowers and a rotisserie chicken for dinner.  I forgot to mention, but I made the cake and a chicken pot pie the night before my birthday for dinner so that I wouldn’t have to make it on my birthday and I could just eat leftovers.  After we went to Costco, we watched some stuff together and snuggled.  Kyle felt much better by then.  My brother, Jeremy (who is on a mission), sent me a letter and it got here on my birthday, so that was a lot of fun.  This is a list of my presents: laptop battery, pizza pan, pot holders, flowers, cleats, money, See’s candy.  Overall it was a pretty good birthday…not what I had envisioned (Kyle and I had planned on going out in nature but saw the weather was going to be bad so planned on going mini golfing or something.  Instead, we stayed home and he slept most of the day…Oh well, what can you do?) 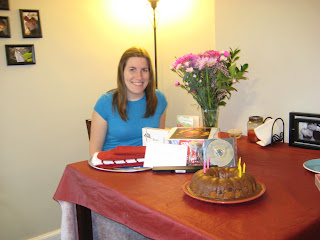 Also, my mom made a video of our wedding footage Nyall and Chris took the day we got married.  It made me so happy and reminded me what a great day it was. We got it on my birthday and watched it together. J 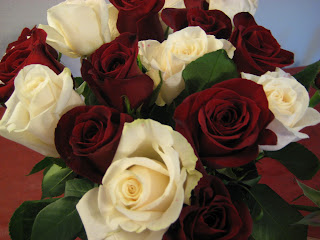 We celebrated our 1 year anniversary on April 23, 2012.  Since Kyle was so sick on my birthday, he wanted to make it up to me so he bought me a beautiful necklace from Jared.  It’s three little hearts intertwined and going vertically.  It was so sweet of him to find such a beautiful necklace.  In addition, he bought me some flowers from Costco.  These flowers were a little different than the usual bouquets, though.  He bought me 3 individually potted Gerbera Daisies so that I could start my own garden. J  It was so cute!  Gerbera Daisies are my favorite flower and they were the cutest colors: light orange, yellow, and pink.  He also bought me 2 dozen roses (he bought me a dozen roses when he proposed with half white for eternity and half red for love). 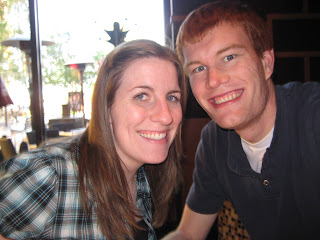 We then went to the mall and took pictures in one of those photobooths (since we’ve never done that before and I’ve always wanted to).  We went out to dinner at PF Chang’s.  (One of our favorite places to go out to eat is Panda Express, so I told Kyle we should step it up a notch tonight since he’s never eaten there.)   After that, we went to Lowe’s so that we could buy a little planter (as well as a few other things) for me to plant my flowers in.  We spent the rest of the evening planting the flowers together. 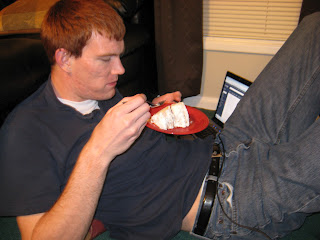 We also enjoyed a piece of our wedding cake...Not nearly as good as it was the day we got married or the half that we shared on our 6 month anniversary.  Oh well. :) We had such a great time.  I love Kyle SO much!  I can’t wait to spend many more years with him!

I graduated with my Master's Degree in December, but walked in the graduation ceremony in April.  My parents drove up from CA and my sister-in-law came down from Bountiful for it.  It was great because I got special permission from my supervisors to attend my graduation without having to take the time off.  It was so awesome.

Life as of Late: